The Airborne Ranger Club of Finland began a series of Arctic expeditions in 1996 with an expedition to Spitsbergen. The expedition consisted of 17 skiers. After a 2-week ski trek, they reached the summit of Mount Newtontoppen (1550 metres) in April 1996.

The next expedition was Kalaallit Nunaat in 1999. The objective was to traverse the Greenland Continental Glacier. An 8-member team skied more than 600 kilometers in 32 days. Towards the end of the route, melt-waters caused huge problems; the team had to wade through chest-deep glacial streams. But finally, the team was able to dry out, overcome its difficulties, and ascend the mountain range on the western edge of the Greenland continental plate at the beginning of July, 1999. The objective had been reached!

Greenland gave us a taste for what would be needed on extended expeditions, but it didn’t test our endurance skills in really cold conditions. So our third expedition took us to the Magnetic North Pole, which would require endurance in really cold temperatures (from -30 to -40 degrees Celcius). In 2003, a team originally consisting of 11 members skied 650 km in 47 days. 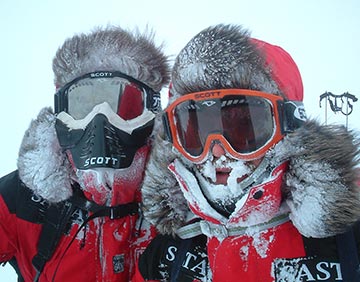